I read a lot of women’s and literary fiction, “beach reads”, historical WWII fiction, and occasionally Young Adult novels. Never Sci-Fi. I’ve never been into any type of Sci-Fi, whether it be books, movies, or TV. It’s not my thing. It doesn’t appeal to me. Which is why I found it weird that I LOVED An Absolutely Remarkable Thing by Hank Green (brother of John Green, whom I adore). 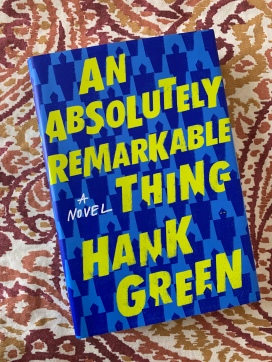 This book was truly remarkable (see what I did there?). I couldn’t put it down. It’s quirky, funny, fast-paced, heart-pounding, and extremely poignant for the world we’re living in now.

Here’s the synopsis from the back of the book:

Roaming through New York City at three a.m., twenty-three-year-old April May stumbles across a giant sculpture. Delighted by its appearance and craftsmanship—like a ten-foot-tall Transformer wearing a suit of samurai armor—April and her best friend, Andy, make a video with it, which Andy uploads to YouTube. The next day, April wakes up to a viral video and a new life. News quickly spreads that there are Carls in dozens of cities around the world—from Beijing to Buenos Aires—and April, as their first documentarian, finds herself at the center of an intense international media spotlight.

Seizing the opportunity to make her mark on the world, April now has to deal with the consequences her new particular brand of fame has on her relationships, her safety, and her own identity. And all eyes are on April to figure out not just what the Carls are, but what they want from us.

I see April May, the book’s protagonist, as an anti-hero. While she’s funny and incredibly likable, she ultimately becomes obsessed with her fame and staying relevant. She’s flawed, but relatable. I mean, who hasn’t at one time or another become obsessed with their social media – only posting the pretty photos, agonizing over clever captions, watching the like count go up… I know I’m guilty of it sometimes. I can become too consumed with checking Instagram and Facebook that I get lost. I’ll look up and see that hours have passed and all I’ve been doing is sitting on the couch with the tv on the Food Network, lost in my stupid phone. This book helped me become more aware of my social media habits. I’ve been trying to be more conscious of it.

Not only was it poignant because of the focus on social media, but also by showing how events can cause the uprising of two distinct groups. Just like in our world today, different groups of people can use the same event to either ignite fear and hatred or understanding and compassion. It felt all too real.

This book made me think, while also keeping me completely entertained. I loved that it was both funny and serious; isn’t that how life is? An Absolutely Remarkable Thing is one of my favorite reads of the year so far.

At first I was bummed that it ended on a cliffhanger; but when I added it to my bookshelf on Goodreads, I noticed that after the title, this appears: (An Absolutely Remarkable Thing #1). Soooo… I’d say it’s a safe bet that this is only the first book of a series! I’m here for it. 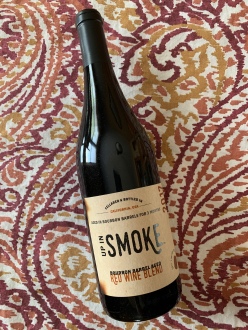 Up in Smoke is a red blend that I got in one of my Bright Cellars boxes. It’s a 2017 limited release that was aged in bourbon barrels for 3 months, which I thought was cool. However, I did not anticipate liking it, but to be honest, I did. It’s VERY different from what I normally drink. Occasionally in the winter when I’m cold, I’ll drink a glass of pinot noir, but I generally stick to chilled, dry white wines. When I opened the bottle it smelled bold. Even though I knew it was a red blend, I could only smell Cabernet Sauvignon. To me it smelled like burnt wood. I was hesitant. But when I took a sip, I got notes of cherry and blackberry jam. It was incredibly smooth and velvety, despite it’s bold scent. I was pleasantly surprised by the wine and the book.

Sometimes it’s good to step outside your comfort zone!

Have you ever enjoyed a book that was outside your comfort zone?

If you’re interested in checking out Bright Cellars, use my referral link to get a $50 credit on your first order!

*I was not compensated for my review. All thoughts and images are my own.*

View all posts by keriwrites

1 thought on “An Absolutely Remarkable Thing”