Please forgive my recent hiatus. Sometimes life gets in the way, but I’m back behind the keyboard!

This week I’m talking about one of my favorite books, The Guernsey Literary and Potato Peel Pie Society by Mary Ann Shaffer and Annie Barrows.

I bought it back in 2009 when it first published. I’m not sure why it took me 10 years to read it. It’s truly beautiful and remarkable. I adore this book. 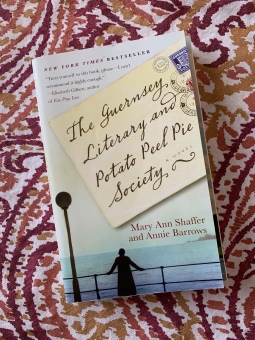 At first, I wasn’t sure if I was going to like it. It doesn’t read like a typical historical fiction; the entire book is told through letters back and forth between different characters. But in the end, that’s what I loved most about it.

Here’s the synopsis from the back of the book:

“I wonder how the book got to Guernsey? Perhaps there is some sort of secret homing instinct in books that brings them to their perfect readers.” January 1946: London is emerging from the shadow of the Second World War, and writer Juliet Ashton is looking for her next book subject. Who could imagine that she would find it in a letter from a man she’s never met, a native of the island of Guernsey, who has come across her name written inside a book by Charles Lamb. . . .

As Juliet and her new correspondent exchange letters, Juliet is drawn into the world of this man and his friends—and what a wonderfully eccentric world it is. The Guernsey Literary and Potato Peel Pie Society—born as a spur-of-the-moment alibi when its members were discovered breaking curfew by the Germans occupying their island—boasts a charming, funny, deeply human cast of characters, from pig farmers to phrenologists, literature lovers all.

Juliet begins a remarkable correspondence with the society’s members, learning about their island, their taste in books, and the impact the recent German occupation has had on their lives. Captivated by their stories, she sets sail for Guernsey, and what she finds will change her forever.

Written with warmth and humor as a series of letters, this novel is a celebration of the written word in all its guises and of finding connection in the most surprising ways. (Shaffer, Mary Ann; Barrows, Annie. The Guernsey Literary and Potato Peel Pie Society, 2009)

In college, I took a Literature of the Holocaust class that completely changed me. That same year, my college choir sang a piece of music that was created from a child’s poem in I Never Saw Another Butterfly. I Never Saw Another Butterfly is a collection of poetry and art created by children who were imprisoned at the Terezin Concentration Camp. The art was found after the liberation of the camp and compiled into a beautiful, heart-breaking, and tragic compilation. Terezin is located outside of Prague in the Czech Republic and was created to cover up the Nazi genocide of the Jews. Most of its inmates were artists and intellectuals. In 2008 on a trip to Austria and the Czech Republic to compete in a choir competition, I visited Terezin with my group. It was a somber and sobering experience. I felt uneasy walking the grounds, like we were somehow disrespectfully intruding. But it was a moment that has stayed with me for a long time and will forever.

Taking place after World War II, The Guernsey Literary and Potato Peel Pie Society shows what it takes to try to put the pieces of yourself back together after war. Through letters, it conveyed different viewpoints of so many characters, each who experienced World War II differently. I really loved that. I was swept up in these characters, almost like they wrote these letters to me. As a result, I felt more involved in the story. If you like World War II historical fiction, I highly recommend this book if you haven’t read it already!

Because I loved this book so much, I wanted to check out the Netflix movie. However, I was very disappointed. As is the case with most movie adaptations, it fell short. Content was not only left out but plot lines were re-written and characters were changed! Since the book is written through letters, the dialogue suffered. As a reader, you only see the characters associate through letters, never in person. I don’t think the movie lived up to it’s potential. The chemistry seemed a bit off with the two main characters, Juliet and Dawsey. They’re two of my favorite literary characters and the book has them develop so beautifully. (Side note: I had a huge literary crush on Dawsey by the end of the book.) To me, the movie fell very flat, which was a bummer.

So, what do I pair with such a story? Because summer is so close and this was such a beautiful read, I decided to pair it with a rosé. Cupcake Rosé is one of my favorites. It’s crisp, super refreshing, and light. The color is absolutely stunning. Plus, it’s super inexpensive. I’ll be drinking it all summer long! 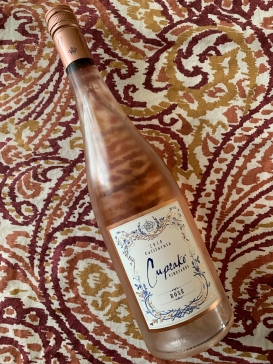 What historical fiction era is your favorite?

*I was not compensated for my review. All thoughts and images are my own.*

View all posts by keriwrites